Alfred Henry Forrester (10 September 1804 – 26 May 1872) was an English author, illustrator and artist, who was also known under the pseudonym of Alfred Crowquill.[1

Alfred Forrester was the son of Robert Forrester of 5 North Gate, Royal Exchange, London, a public notary. He discovered an aptitude for literary and artistic pursuits from an early age, and was soon associated with writing for periodical publications, including Colburn’s New Monthly, Bentley, and Punch magazine. He often wrote short tales, songs, children’s stories, and occasional burlesques. He could also draw and worked on wood, etchings and caricatures using pen and ink, specialising in anthropomorphic animals, occasionally illustrating stories for his brother Charles Robert Forrester (1803–1850) who wrote under the pseudonym of Hal Willis.

He also made several popular ceramics of contemporary subjects, including a “Memorial of the Great Exhibition of 1851” and a statuette of Wellington Bear. He illustrated plays for children in Dean & Son’s series, Little Plays for Little People. In 1854 Julia Corner wrote a play for children based around the Beauty and the Beast fairy story which was illustrated by Forrester working under the name of Alfred Crowquill.[2] 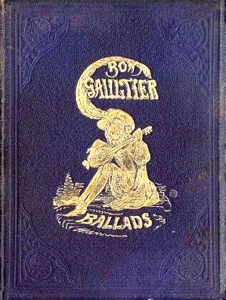 This collection of humorous verse went through many editions. This is the first with illustrations by Richard Doyle. Read for free online at HathiTrust.