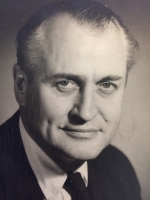 Richard Staples ("Dick") Dodge was an American artist and illustrator of books and records.

Born January 18, 1917 in Sacramento, California, he attended the Cincinnati Art Academy before moving to Westport, Connecticut to work at Columbia Records in Bridgeport, Connecticut, at the request of his friend and colleague James Flora.

Dick Dodge met his second wife, Blanche Gibbs Gillespie, while carpooling from Westport to Bridgeport. They had two children before divorcing.

Dick Dodge was a charter member of the Artists Guild of Westport, Connecticut, and the Illustrators Society of New York. He was also a member of the American Watercolor Society.

Biography, photograph, and extended bibliography courtesy of the family of Dick Dodge.

Bertie Wooster Sees it Through (1955)

Bertie finds himself once more at Brinkley Court, sampling the delights of Anatole’s cooking while attempting to help Aunt Dahlia sell off her magazine.

This was first published in England in 1954 under the title Jeeves and the Feudal Spirit.

When the ex-butler Keggs informs one of the two remaining competitors for the payout of a ‘last son to be married’ tontine of its existence matters begin to get complicated in a hurry.

Bertie Wooster is off learning to fend for himself while Jeeves fills in the time as a bookie of the silver ring. Those without money connect with them what does and sundered hearts beat as one. Much revised from the British first edition, this novel is derived from a play written by Plum and Guy Bolton, Come On Jeeves.