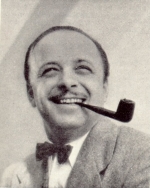 Born in Newton, Massachusetts to a literary family, he was the son of Gertrude Darling and Robert Benchley (1889–1945), the noted American writer, humorist, critic, actor, and one of the founders of the Algonquin Round Table in New York City. He enlisted in the U.S. Navy prior to the attack on Pearl Harbor[1] and served as a public relations officer and on convoy duty in the Atlantic on destroyers and patrol craft.[2] He was transferred to the Pacific in 1945. He later worked for Newsweek magazine as an assistant drama editor.

Benchley was the highly respected author of many children’s/juvenile books that provided learning for the youthful readers with stories of various animals or through the book’s historical settings.

When Lonny falls sick the two mice go to the moon dance alone and unprotected.