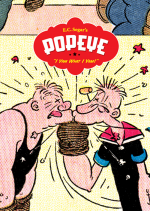 Popeye the Sailor is a cartoon fictional character created by E. C. Segar. The character first appeared in 1929.

Between 2006 and 2011, Fantagraphics Books published six oversized hardcover volumes, reprinting all dailies and Sundays (in color, along with Sappo) featuring Popeye, plus various extras.


Books in the Popeye the Sailor series: