Typee: A Peep at Polynesian Life

Loosely based on his own adventures, Herman Melville here tells the story of two American sailors who jump ship on the island of Nuku Hiva in the Marquesas Islands and spend four months with the natives. While roundly condemned as fictitious at the time of publication, Melville’s companion Toby Greene later corroborated his account. 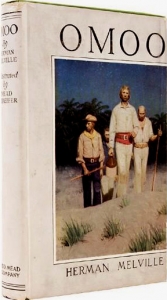 1924
Omoo: A Narrative of Adventures in the South Seas, a Sequel to Typee
(Dodd, Mead & Co.•Hodder & Stoughton)