The Bean farm animals found the first animal republic and Mrs. Wiggins runs for president. In the meantime Freddy is founding the First Animal Bank of Centerboro. Later published as Freddy the Politician. 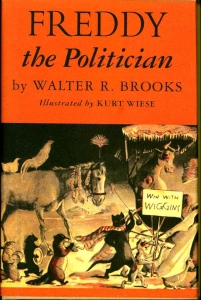 This book belongs to the Series: Freddy the Pig