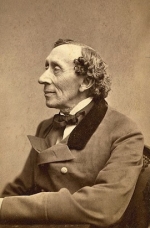 Hans Christian Andersen, often referred to in Scandinavia as H. C. Andersen, was a Danish author and poet.

Although a prolific writer of plays, travelogues, novels, and poems, Andersen is best remembered for his fairy tales.

Andersen’s popularity is not limited to children; his stories—called eventyr, or “fairy-tales”—express themes that transcend age and nationality.

Andersen’s fairy tales, which have been translated into more than 125 languages, have become culturally embedded in the West’s collective consciousness, readily accessible to children, but presenting lessons of virtue and resilience in the face of adversity for mature readers as well.

They have inspired motion pictures, plays, ballets, and animated films.

A dozen of Andersen’s best with Dugald Stewart Walker’s incredible illustrations. The pen and ink are even better than the color. READ NOW.

A selection from the master.

A collection of bold and original Fairy Tales by Hans Christian Andersen.

A complete collection of bold and original Fairy Tales by Hans Christian Andersen.

An anthology of stories and poems. Many of the illustrations are new to this collection.

A collection of stories, verses and articles, some of which have new illustrations.

An assortment of stories, poems and articles, some of which have new illustrations.

This six volume edition includes a new translation of all the fairy tales and longer stories as well as a few previously unpublished stories by Hans Christian Andersen.

This is the first English edition of any of Andersen’s tales and includes fourteen, among which are The Wild Swans, The Ugly Duckling, and The Little Mermaid. Read for free online at HathiTrust.

This is the second, enlarged, edition which includes a total of 45 stories.

This is the third, much enlarged, edition which includes a total of fifty-seven stories. Read online at archive.org.

The tale of a gullible emperor, two persuasive rascals and a little boy who knew what he saw.

This version includes a multitude of illustrators and writers and a CD recording of the book.

This edition in four volumes was published in the author’s hometown and includes the original illustrations.

Seven familiar tales by Andersen including The Princess and the Pea, and The Tinderbox.

The little fir tree is not content with its life in the forest and longs to be a Christmas tree.

The Flower Maiden and Other Stories (1922)

Seven favorite stories including The Emperor’s New Clothes, The Mermaid and The Fir Tree. Read online at Internet Archive.

Seventeen tales, including The Flying Trunk and The Red Shoes. Read for free online at Internet Archive:

This new translation of twenty-six of the best-loved stories is worth reading.

A selection of twenty-six of the author’s most popular tales along with the original illustrations.

A selection of Hans Christian Andersen’s stories with black and white illustrations by Louis Rhead and color plates by Frank Schoonover. This scan lacks the Schoonover illlustrations. Read online at Hathitrust.

This two-volume edition includes a new translation of some of the fairy tales by Hans Christian Andersen as well his correspondence with his first American publisher, Horace Scudder.

It’s Perfectly True and Other Stories (1938)

Forced to sell matches on the street on a freezing Christmas eve, the little match girl is taken in by a kindly grandmother.

One of Andersen’s most pathetic tales.

The story of a mermaid who wins the love of a mortal man.

The little mermaid wishes to become human, but at what cost?

This collection contains nine tales, including The Wild Swans and lesser known stories such as The Elfin Hill.

The classic tale of the Emperor who could not treasure the real over the artificial, until death came for him.

Cast aside for a mechanical marvel, the nightingale does not abandon its song.

The old man takes his horse to market and makes a series of unfortunate trades, but his old wife is pleased all the same.

Kate Greenaway was working on these illustrations when she passed away.

When the Snow Queen steals Kai away, Gerda goes in search of him.

When the Snow Queen steals Kai away, Gerda goes in search of him. This is the revised edition.

A favorite story from Andersen.

The emperor’s daughter does not appreciate the neighboring prince or his gifts, but she will kiss the swineherd.

A very small girl has many adventures.

A very tiny girl has many adventures.

A very small young lady has many adventures. This is the revised edition.

A very small young lady has many adventures. This is the revised edition.

A Treasury of Hans Christian Andersen (1974)

A new English translation containing seventy-two of the tales.

A varied selection of classics and lesser-known tales by the Danish master.

One of the duck’s new chicks is uncommonly ugly.

A classic story by the Danish master.

One of the duck’s eggs hatches out an ugly chick.

When one of the ducklings doesn’t match the rest of the hatchlings, he is shunned by the farmyard animals, until he discovers he belongs to a different family altogether.

The classic story of the misfit who grows up to be a swan.

Eleven brothers, enchanted by an evil stepmother, are restored to their true forms by the sacrifice of their sister.

Eleven brothers, enchanted by an evil stepmother, are restored to their true forms by the sacrifice of their sister.

Nine favorite stories including The Steadfast Tin Soldier, The Marsh King’s Daughter, and The Storks among others. Read online at archive.org.