Adam of the Road

Adam of the Road is a novel by Elizabeth Janet Gray. Gray won the Newbery Medal for excellence in American children’s literature in 1943 for this the book. Set in thirteenth-century England, the book follows the adventures of a young boy, Adam. After losing his spaniel and minstrel father, Adam embarks on a series of escapades throughout medieval England. Readers are given an accurate portrayal of medieval culture and society. The book is illustrated by Robert Lawson. This is the first British edition. The type was reset, reducing the page count considerably. The prefatory poem is missing. 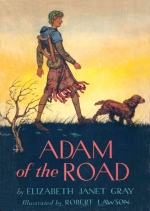 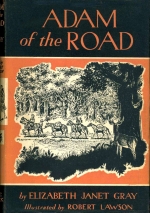