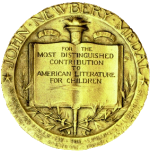 The Newberry Medal is awarded each year to the author of the previous year’s most distinguished contribution to American literature for children. Runners-up are called Newbery Honor Books.

The medal is named in honor of John Newbery. He was an eighteenth-century British publisher of juvenile books. He made it a priority to create books specifically for children.

The Newberry Medal and the Caldecott Medal are the most prestigious American Children’s Book awards.

The Voyages of Doctor Dolittle (1922)

In search of Long Arrow the Indian, Doctor Dolittle and his companions journey to the floating Spidermonkey Island. Read online at archive.org.

The adventures of a doll, carved from a piece of mountain ash, brought from Ireland to the state of Maine.

At age thirteen Young Fu is apprenticed to a coppersmith in the big city of Chungking.

Pioneer adventures of a girl growing up in northern Wisconsin.

Lucinda spends a year on her own in New York city in the 1890’s while her parents travel abroad for her mother’s health.

The legendary tale of the migration of the Huns and Magyars from the east to Hungary.

Garnet lives on a farm in Wisconsin and has adventures all summer long.

Adam of the Road is a novel by Elizabeth Janet Gray. Gray won the Newbery Medal for excellence in American children’s literature in 1943 for this the book. Set in thirteenth-century England, the book follows the adventures of a young boy, Adam. After losing his spaniel and minstrel father, Adam embarks on a series of escapades throughout medieval England. Readers are given an accurate portrayal of medieval culture and society. The book is illustrated by Robert Lawson.

When Johnny’s hand injury prevents him working as a silversmith’s apprentice, he joins the American rebels as a messenger.

Little Georgie and his friends welcome the New Folks to Rabbit Hill.

Birdie Boyer and her family move to Florida to raise strawberries.

Miss Hickory has a hickory nut for a head, but her body is an applewood twig.

Professor William Waterman Sherman left San Francisco on August 15th, 1883 with the intention of flying across the Pacific Ocean. He was picked up three weeks later in the Atlantic Ocean clinging to the wreckage of a platform which had been flown through the air by twenty balloons. His only stop between San Francisco and the Atlantic Ocean was a brief sojourn on the island of Krakatoa, which blew up just after he left it in what is considered to be the most violent eruption of all time.

Brought to Massachusetts as a slave, after forty-five years he was able to buy his freedom, moved to New Hampshire and set up as a tanner.

When their new puppy, Ginger, disappears the Pye’s suspect the man in the yellow hat may be the thief.

A clear-eyed look at the American south at the time of the Great Depression through the eyes of a young African American girl.