Robert Gard helped to establish the Provincial Archives of Alberta in 1945; and his collections, assembled from firsthand accounts of pioneers still living, constitute today one of the rare collections of the University of Alberta.

In 1945 he received an offer to join the faculty of the University of Wisconsin, and took up residence there in the fall of that year when he established the Wisconsin Idea Theatre. This was a cultural program for the whole state and reflected popular concepts of Wisconsin theatre and literature as brought to the state and as foreseen by the pioneers.

In Wisconsin, his chief areas of activity were in the theatre arts and in creative writing, with a strong side activity in collecting and publishing the folklore of the state. In 1967 he established the functional area of Arts Development under University Extension and remained a specialist in the arts in smaller communities and rural areas. 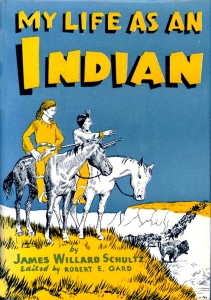 An abridged account of the author’s life as a trapper, trader, guide and adopted member of the Piegan Blackfeet tribe.