The Story of the Amulet

The five children re-encounter the Psammead—the “It” in Five Children and It. As it no longer grants wishes to the children, however, its capacity is mainly advisory in relation to the children’s other discovery, the Amulet. Read online at Gutenberg.org. 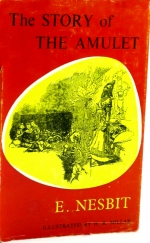 1949
The Story of the Amulet
(Coward-McCann, Inc. & Ernest Benn Limited)

This book belongs to the Series: Five Children and It